You are here: Home / Ecology / Australia / Norfolk Island and the Incredible Phillip Island I love seabird islands. They exude a special energy often enhanced by the excitement of being landed on some slippery, craggy ledge after a rollicking boat ride.

This familiar scenario was played out when I visited Phillip Island, some 7 km off the coast of Norfolk Island with Peter Coyne. Peter is the author of a book on the island titled: “Incredible! The Amazing story of the birth and rebirth of a natural treasure” in August 2013. It is indeed an incredible island. From a distance much of it still looks like a red and purple coloured moonscape. That is what it became when the Officers, during the convict days of the early 1790s, introduced goats, rabbits and pigs to the island, for hunting pleasure as well as a food source.

Peter, who hadn’t visit the island for nearly 5 years, was delighted to have the excuse of being my guide. He was keen to see what changes in vegetation cover were happening following the successful eradication of these pests that started under his initiative some 30 years previously. Set ropes close to our landing spot helped us clamber up the first of the cliff faces. It was only minutes into the climb that I had my first ‘wow’ moment when I spied the grey ternlet (Procelsterna albivitta) crouching in a cavity by the track which only breeds here and on the Nepean Islands and then seconds later I was eyeballed by soft-grey headed, handsome black bodied common noddy (Anous stolidus) nesting on a rocky ledge near where I was placing my hand to heave myself upwards. 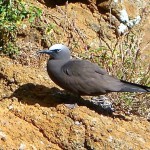 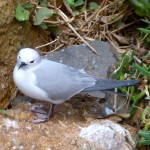 The common noddy is not really that common and in fact rarely seen on main Norfolk Is – understandably, given, that like most seabirds they nest on the ground and would be predated by cats, rats and dogs there.

And this is how the day continued one ‘wow’ moment after another as I watched red-tailed tropic birds (Phaethon rubricauda) sitting on eggs tucked against a precipice, Frigate birds (Fregata spp) soaring in the thermals above the cliffs, black noddies (Anous minutus) looking regally at you from rough stick nests in the trees we were gingerly picking our way through to avoid collapsing petrel burrows. 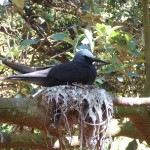 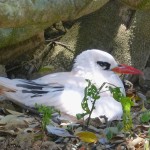 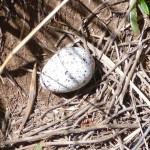 Peter and I had not been alone on the boat coming to the island. When news was spread that we had chartered the fishing boat to drop us off en route to the fishing grounds, a couple of locals joined the expedition, with buckets to collect the eggs of whalebird (Sterna fuscata).

It was no surprise therefore when our route on the island took us through their nesting areas, that the birds became highly agitated – taking to the skies with distress calls. We had no choice but to go through their territory to reach the high point on the island, but I couldn’t get out of this area quick enough.

This controversial practice of collecting eggs is allowed for a limited period each year.  However, members in our party were skeptical as to whether anything particularly productive was done with the eggs – they felt it was more a determination to keep this traditional practice alive.

Botanising was out of the question on this route as every step I needed to check that I wasn’t standing on a nest. Well they could hardly be called nests, as the eggs were held in place by the merest dent in the soil.

The other unexpected member on our boat was another local, an 80 year old, Honey McCoy, who was coming out to the island to band the juvenile masked boobies (Sula dactylatra tasmani) – a job she had been doing for decades. 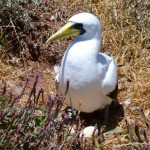 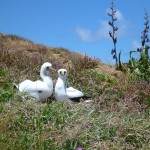 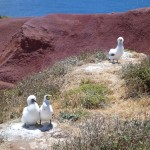 These birds definitely took the prize as the most photogenic inhabitant on the island. The youngsters were very cute, looking like they were playing dress-ups having covered themselves in a downy-feathered suit. They sat tall, not a care in the world on what again could hardly be called a nest – just a flat platform, generally but not always with a watchful parent in attendance.

So how did Peter feel the island was faring in terms of regeneration?

Peter was delighted with the changes. Lots more cover since his last visit which in turn had provided habitat for hundreds more nesting and burrowing birds that were clearly bountiful.  With so much of the topsoil blown off over a couple of centuries, exposing the stunningly coloured volcanic earth beneath, this was going to be a slow process of regeneration but it was well underway with help of those nutrient rich seabird deposits coming in nightly.