You are here: Home / Ecology / New Zealand / Christchurch / Roaming in a Fuchsia Forest

Wall to wall kotukutuku (Fuchsia excorticata) greeted me this morning when I paused along the Summit Road above Christchurch to do a short walk through Omahu Bush Reserve. I love the creamy-gold peeling bark of these trees that invites you to finger their paper-thin layers and the very delicate purple-pink flowers that sprinkle the forest floor at this time of the year. That such a dense patch of fuchsia has survived is a great testament to the success of possum control of the Summit Road Society. (My mother Betty Roberts was active member of the society for many years, and we stopped at her commemorative seat near the Sign of the Bellbird after our walk.) 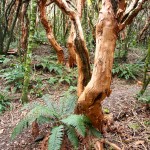 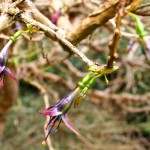 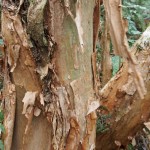 From the car park the track I took plunged straight down the hillside and offered a range of options for walking from 30-80 minutes. After 15 minutes the track emerged to a grassed pathway where the choice is to either continue down through bush or head back to the Summit Road on this grassy open track.

Choosing the open path, I was delighted to note horopito (Pseudowintera colorata), one of my favourite shrubs, was in abundance along the forest edge as well as an array of those ‘hard to identify’ small leaved shrubs (such as Coprosma rotundifolia) but noted also the occasional stinging nettle (Urtica urens) reminding me to pay attention when leaning in to take photos. 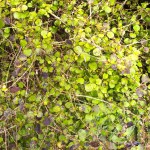 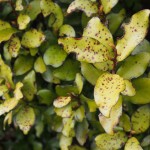 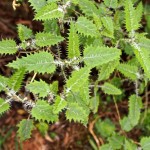 The grey warbler (Gerygone igata) song felt longer and more melodious than usual but that was the only birdsong I heard, and given that this week we are asked to count kereru I was disappointed not to see one today.

The open track heading up also provided wonderful views to Lake Ellesmere/Waihora and to volcanic outcrops, such as Gibraltar Rock. Gorse (Ulex europaeus) was also having a great spring. As I looked out across to a sea of brilliant yellow I thought ‘Hugh Wilson’. Hugh has demonstrated at Hinewai that gorse is an excellent protective nursery for natives to establish within. I hoped that this gorse might be an indication that regeneration, rather than clearance, is the plan for these hillsides in the distance. Forested hillsides filled with birdsong could once again be the backdrop to the city and plains.